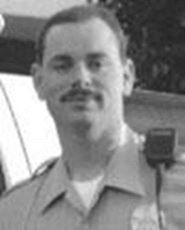 Suspect: Shot and killed by officer

December 25, 1997 – 1727 hours:  9-1-1 call received from a residence on Westside Terrace in reference to a possible shooting.  DPD Officers Foultz, Swaney, and Sgt. McLean responded to the scene.  The officers spoke to family members who said they wanted the suspect arrested to keep him from retaliating against a person who shot at the suspect and two young cousins outside of his residence moments earlier.  Officer Swaney and Sgt. McLean followed the suspect down the street and onto Mock Circle.  A crowd of people from the neighborhood gathered and followed the suspect, the officers, and the suspect’s uncle.

The suspect died on scene.  Officer Swaney was mortally wounded and died shortly after arrival at the hospital.  Sgt. McLean was shot once and recovered from his gunshot wound.

Mark Swaney was an all American son, brother, and friend.   Growing up, Mark was involved in his home church, Fieldstone Presbyterian Church in Mooresville, NC, where he participated in mission trips to Mexico.  Mark also joined Boy Scouts where he learned about being a good citizen and service in his community.   Being involved with his church and scouting, Mark realized his calling to help others and see himself as a public servant.  While in high school, Mark was involved in the band and football, and after graduation, Mark attended Mitchell Community College where he graduated with an associate’s degree in Criminal Justice.

Mark enrolled in the North Carolina Basic Law Enforcement Training Academy and started his career with  the Charlotte-Douglas Airport Police before joining the Davidson Police Department.  During Mark’s service with the Davidson Police Department, he dedicated his career and life to the town and its citizens.  He was a very productive officer who concentrated on the enforcement of drug laws and the impact on the lives of young people in the community.  Mark was a volunteer youth sports coach in Davidson and sought to help those less fortunate than himself.  One local resident remembers Officer Swaney asking how to get help in renovating the home of an elderly man with a disabled son.  Funds and materials were raised to make improvements to the residence, and Mark worked on the renovation with other community members.

He was valued in the community for this dedication to youth, commitment to service, and self-sacrifice.  For example, the day Mark was killed was Christmas and Mark had volunteered to work for another officer so the other officer could be home with his children for Christmas. Mark gave his life doing what he truly loved, and he is missed by his family, citizens, and his law enforcement family in Davidson.   There is no more worthy cause than giving your life to help others, and Mark will forever be remembered this way.  From Mark’s sister:  “Mark was a people’s policeman.  He would walk his beat as much as drive.  He loved his job and took it very seriously.  He always wanted to be a policeman from the time he was a little boy because he wanted to follow in our father’s footsteps.”