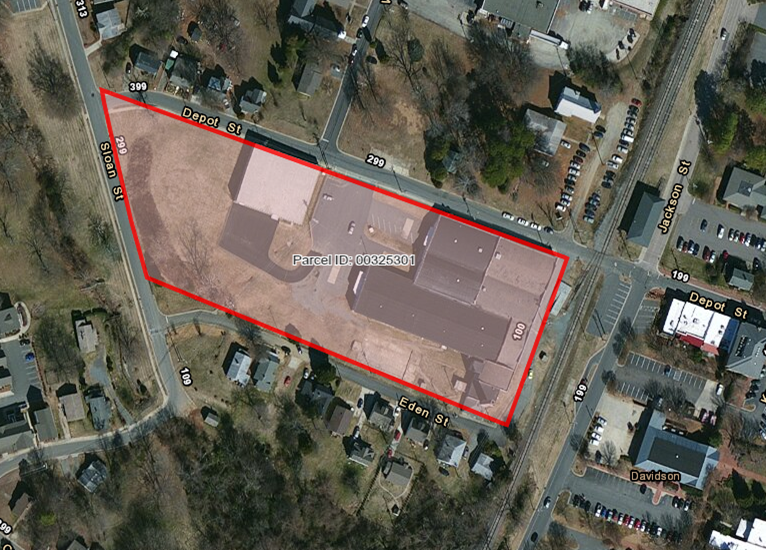 From the 1930s until the 1960s, the Carolina Asbestos Company operated at 301 Depot Street in Davidson (outlined in red above). Asbestos-containing waste material remained uncovered at the property until 1984. It was reported that asbestos-containing material had been removed from the manufacturing location and used as fill at neighboring properties.

In 1984, under the supervision of the North Carolina Division of Health Services’ Health Hazards Control Unit in the state’s Department of Health and Human Services, the then-owner placed an engineered soil cap over the disposal area.

In September of 2016, the N.C. Department of Environmental Quality (DEQ) Brownfields Program held a public information session about plans for a multi-story mixed use redevelopment of the property. At the time, neighbors voiced concerns about potential asbestos exposure during construction. In October of that same year, a flood caused a breach of the existing soil cover and released asbestos fibers into the street bordering the property, further raising awareness and concern in the community.

The North Carolina Department of Environmental Quality (NCDEQ) is responsible for work being done at the Metrolina Warehouse site. The United States Environmental Protection Agency (EPA) is responsible for remediating the properties adjacent to the Metrolina Warehouse site and in the surrounding area. The North Carolina Department of Health and Human Services (Division of Public Health) can answer questions regarding health concerns based on potential asbestos exposure.

When the first Brownfields applicant decided not to redevelop the site, a second applicant came into the program and proposed a more modest repurposing of existing structures on the property. This new plan does not require excavation of the disposal area. It requires a retaining wall, more clean soil and gravel fill, and a paved cap over the disposal area that will be used as parking. The Brownfields Program staff and the developer presented these plans at a public information session on December 9, 2019.

This meeting provided an opportunity for citizens to get an update on the Brownfields redevelopment plans for the property. The meeting consisted of presentations, a question-and-answer period and a listening session. The meeting included a brief history of past events, ongoing activities and the planned long-term cap solution. Attendees had an opportunity to speak and ask questions.

The meeting focused on the proposed Brownfields redevelopment and long-term asbestos risk management at the property, not the local land-use or zoning provisions related to the project. This meeting did not cover NCDOT roadway project U-5907 or Charlotte Water water-main expansion plan.

You may view the full notice of the public meeting from the NCDEQ here. Presentation available here.

At DEQ Division of Waste Management’s (DWM) request in 2016, the Environmental Protection Agency’s Superfund Emergency Response and Removal Branch oversaw the emergency repair of the breach in the soil cap. Because of reports that in past decades, asbestos-containing material had been removed from the manufacturing location and used as fill at neighboring properties, the EPA inspected properties identified as having asbestos-containing material. Between November 1, 2016 through May 16, 2017, the EPA’s Emergency Response, Removal, Prevention and Preparedness Branch conducted soil sampling at 93 neighboring properties.

Thirty-two residential properties tested above the EPA’s health-based exposure limit. The EPA removed the top one-to-two feet of asbestos-contaminated soil, marked the end of excavation and installed clean fill and sod at those 32 properties. From May 15 through August 22, 2017, the EPA removed approximately 6,204 tons of asbestos-contaminated waste and disposed of it at an EPA-approved landfill. On January 25, 2018, the EPA sent letters to property owners stating the removal work was complete and that “No Further Action” was planned for their properties.

At the same time, DWM staff oversaw the installation of an improved soil cap over the disposal area by the owners of the 301 Depot Street property. This improved cap is a temporary measure until the site is redeveloped through the Brownfields Program to provide for a permanently maintained hard cover.

In September 2016, Miller-Valentine, the developer for the Metrolina Warehouse site, held a meeting with citizens who live adjacent to the site to discuss their plans for their proposed Davidson Depot project. At that meeting, the developer and a representative from the NC Department of Environmental Quality’s Brownfields Program discussed the plans for environmental remediation of the underground asbestos material at the site.  Many specific and detailed questions were asked about the remediation and construction processes. At that time, the developer was not far along enough in the planning process to be able to fully answer questions from citizens -- they are working on that plan to share with citizens at a future meeting. Also in that September meeting, concerns were raised by citizens about the impacts adjacent to the site, so the state requested the Environmental Protection Agency’s review of the area in Davidson.

On December 15, 2016, the North Carolina Department of Environmental Quality held a meeting at the Ada Jenkins Center to explain its interim process to re-stabilize the Metrolina Warehouse site. They placed green silt fencing around the west side of the site along Sloan Street to contain any asbestos that might be released due to erosion or varmints digging.

In January 2017, they completed the interim process to secure the Metrolina Warehouse site until a more permanent engineered process is determined. This interim work included:

On November 1, 2016, the representative from the state’s Brownfields Program and the U.S. EPA came to Davidson to conduct a site survey and to make plans to contact adjacent residents. When they were here, they discovered some asbestos-containing material along Eden and Sloan streets that was released from the site. The release was the result of a varmint digging in to the embankment and a localized area where erosion had occurred. The property owner was contacted and immediately hired a certified contractor to remove the material and remediate.  The EPA is visiting properties in a ring around the Metrolina Warehouse site property to see if residents/property owners will agree to free soil testing. If asbestos is found on their site, the EPA will fund remediation, making the property safe.The EPA concluded their work in Davidson on Wednesday, August 30, 2017 and held a community meeting on October 3, 2017 to provide an overview of the successful remediation work they completed.

Here is a map that shows which properties were tested and the results at each property:

For questions related to the EPA's work, please contact:

If you are concerned that you might have been exposed to asbestos and have questions about your health, please contact the North Carolina Department of Health and Human Services (Division of Public Health):